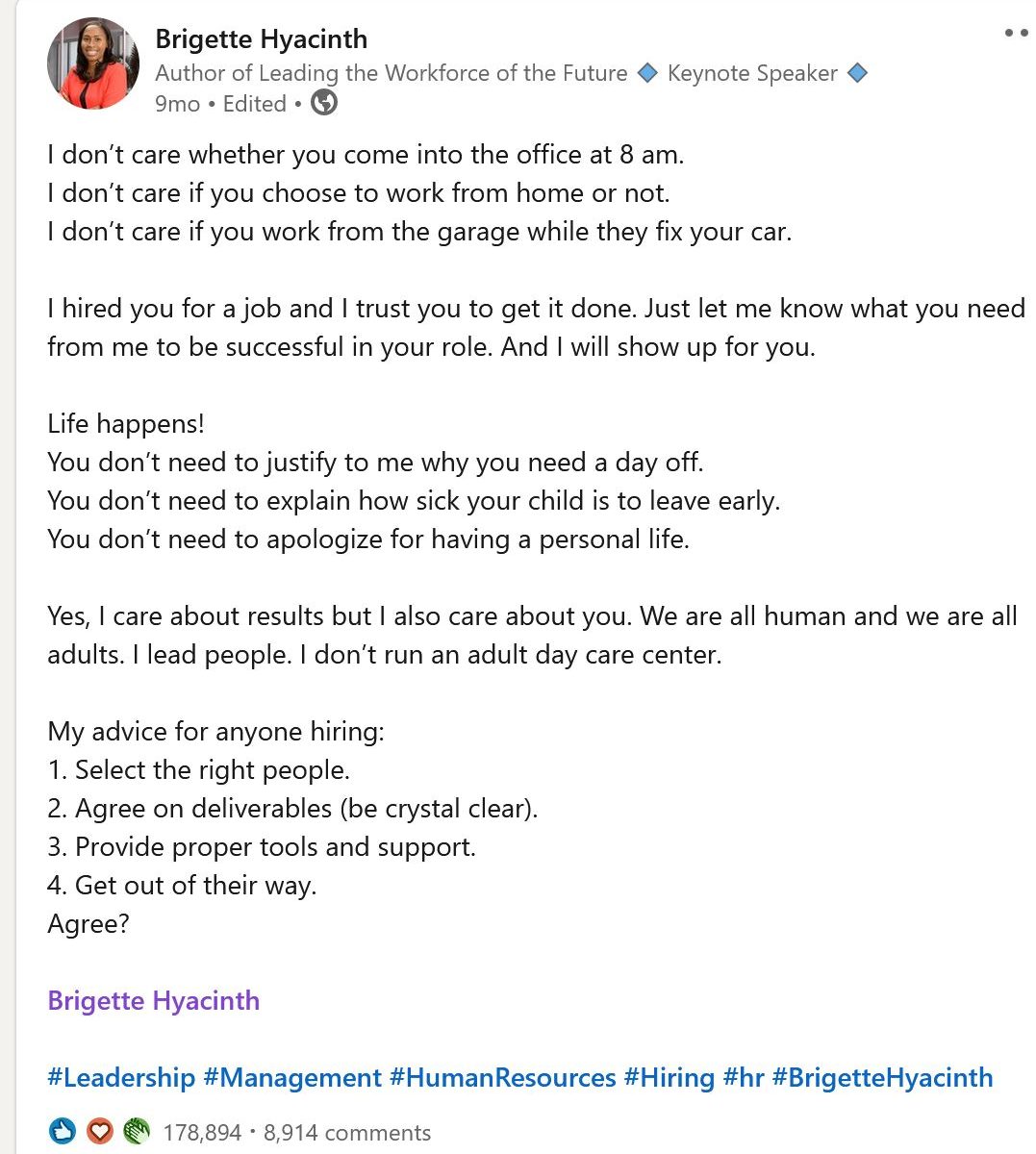 I hired you for a job and I trust you to get it done. Just let me know what you need from me to be successful in your role. And I will show up for you.

Yes, I care about results but I also care about you. We are all human and we are all adults. I lead people. I don’t run an adult day care center.

My advice for anyone hiring:
1. Select the right people.
2. Agree on deliverables (be crystal clear).
3. Provide proper tools and support.
4. Get out of their way. 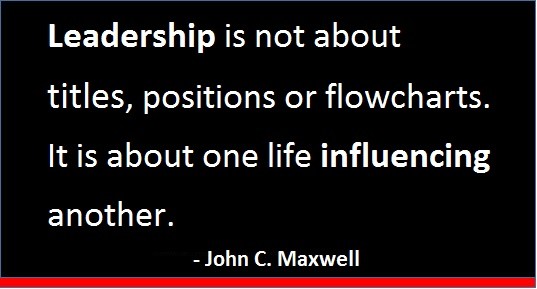 I lost one of my managers a couple of years ago, and I can’t seem to forget him or the legacy he left behind. He was one of my earliest examples of true leadership.

I had a family emergency and before I could finish explaining to him the situation. He said, “And you are still standing here talking to me? Why aren’t you out the door yet? I’ll cover for you.” I smiled then went to my desk, took my belongings and left. Thereafter, he had my full commitment.

Titles Don’t Make Leaders—Actions Do – How to lead with influence instead of authority:

“ Leadership is not a position or a title, it is action and example .” – Cory Booker

Sadly, Joseph people-first approach did not sit well with top management. Eventually he was removed from his position, and transferred to a back office function. They took away his job title but they could not remove his title as a “leader”. We still kept in contact with him.

Managers are forgotten, but leaders live on in the hearts and minds of their followers long after they have gone. Sometimes I can still picture Joseph walking through the office, greeting staff on mornings. Those were the special moments I still hold dear. It doesn’t take much to create those special moments with your team. Being a leader is caring about others and wanting the best for them. It’s about empowering and encouraging employees to reach their full potential. True leaders don’t create more followers, they create more leaders. If you want to leave a legacy, invest in people. 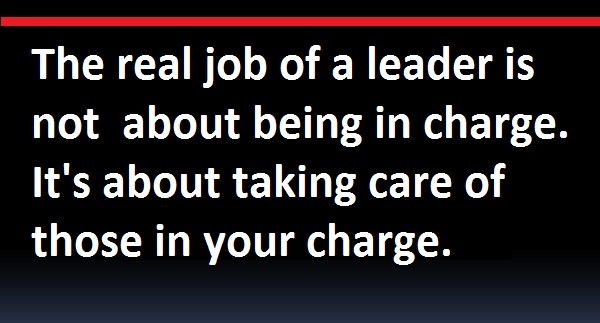 Yesterday, I was speaking to Jill (not her real name) who had been on extended sick leave. She was diagnosed with cancer in 2016. She returned to work but was hurt that not one of the Managers called to see how she was doing. Her immediate supervisor would call but quickly cut to the chase, asking her when she was coming back out to work. The cancer is in remission now but Jill said, “I am not going the extra mile like before; they don’t care about me and I don’t care about them!”

1.Show that you Care – If we treat people only as the means to an end, we will never have their loyalty. Don’t just consider them as a robot on your cog-like production line.Treat your people right. It doesn’t mean being overly attentive or soft but demonstrate that you value people. It doesn’t take much to show people that you care. If you have an employee on extended sick leave or who loses a family member. Pick up the phone and call them. Be genuinely sympathetic. It will mean the world to them. Sending a card or flowers is good, but take the time to call them. This is something they will never forget. You don’t have to pry. Just a simple question as, “How are you doing today?” will let them know that you care.

2. Show Respect – Wanting employees to come in early and leave late on a daily basis shows a lack of respect for their personal lives. Additionally, contacting them after work hours or while they are on vacation should be avoided. Yes there are situations where you will need to, but this should not be the norm. When employees realize that you don’t care about them by infringing on their personal time, everything you do regarding relationship building activities will seem superficial.

3. Connect with your Team – Be visible. Make your presence felt. Don’t just lock yourself in your office for the whole day and only communicate with staff when you want something done. How can you motivate the troops when you are out of sight? Come down from the mountaintop and mix and mingle with your subordinates. Sit at lunch with them. Get to know your team. Empathy and listening go hand in hand. Listening forms the foundation of good relationships. Why? Because it shows you care.

4. Advocate for Staff – Exhibit loyalty to your employees. In some cases if a complaint is made against an employee, the manager is quick to jump in, and suddenly all the good the employee has done is cast into the sea of forgetfulness. Don’t be the judge, jury, and executioner. Don’t throw your people under the bus, let them know you have their back. Managers also lose credibility when they refuse to hold themselves accountable, point fingers and palm of the blame on others.

5. Grant Autonomy – Micromanaging and breathing down someone’s neck all the time can be very disheartening. Sometimes knowing when to step back and let your employees do their work is what they need. Give people responsibility and challenges that will help them to grow. Let them come up with ideas. When you empower your employees it shows that you trust them and they will not want to let you down.

6. Be Fair and Neutral – We know too well about office politics and favoritism. It’s really sad when employees can tell who will be getting the next promotion based on a manager’s relationship with some employees. Unfair practices relate to how vacancies are filled, disciplining inconsistently and even in how a leader allows leeway in work schedules. This fosters low engagement. Give constructive feedback rather than criticism. Don’t give preferential treatment to some employees and ignore others.

7. Share and Give Credit. – Don’t brush over your team’s successes with a bland acknowledgement while automatically working towards the next goal? Be generous with Reward and Recognition and “Thank Yous.” Recognize publicly. Rather than just recognizing top performers include those who are improving or doing their best. Furthermore, Celebrate victories. Don’t be a taskmaster! Yes, employees already know that they come to the office to do a job, but you should not stop them from having fun as well.

” Everyone you meet is fighting a battle you know nothing about. Be kind. Always. “

Leadership is about people -full stop! If you don’t have a passion for people, you have no business leading them. In a perfect world, employees leave their problems at the door. In this not-so-perfect world, they bring them to work. We need leaders who will practice empathy. According to studies, empathy is the single biggest leadership skill needed today.

Sometimes it’s the little things we do that counts the most. It’s the simple things people remember. The thoughtful gesture, the kind word, the much needed support. It’s doesn’t cost much to show employees you genuinely care, but it can make the biggest difference in keeping them loyal, happy and engaged.

We often equate success with talent. But the reality is, talent and technical skills alone is not enough. We all have seen talented people squander their success by making poor decisions.

Here are 10 behaviors that require zero talent yet have a huge impact on our success:

Success is the sum of small efforts – repeated day in and day out. – Robert Collier

Which skills are you lacking, and where do you occasionally fall short? Most of the big opportunities that we get in life come as a result of the little choices we make every day. Poor choices can potentially harm your future success. In life, your competition isn’t other people. It’s the negative thoughts you think, the time you waste, the procrastination you allow, the unhealthy food you eat and the personal development you ignore. Look in the mirror. That’s your competition.

Soft skills are absolutely invaluable in every organization, and each will boost you towards greater personal and professional success! We can’t control what life throws at us but we can control how we react to it. Start making wise choices. Small steps every day. It will not only help you achieve success but it will also help to sustain it.

Employees might join companies, but they leave managers. Too many managers view their position as one of entitlement rather than one of responsibility. Managers define culture, and culture under-girds the lasting health, success and sustainability of an organization.

The biggest danger of leadership: Arrogance

According to research from the University of Washington Foster School of Business, humble people are more likely to be make the most effective leaders. It turns out, humility offers a competitive advantage.

So why has arrogant or narcissistic leaders become the norm:

It has been historically perceived that humility is a sign of weakness and an antithesis to leadership. There is still an expectation that successful leaders are more arrogant than humble. Narcissism is mistaken for self-confidence and toxic leaders seem to be in control of everything. They are able to provide short-term results but the truth is they leave a a trail of destruction in their path. Organizations pay heavily for such managers with low engagement, high turnover and reduced productivity.

The x– factor of great leadership is not personality, it’s humility.” -Jim Collins

The Power of Humility in the Workplace

Leading with humility means focusing on others and practicing servant leadership. Humble leaders:

1.They put people first. There focus is on serving others. They do not get consumed by seeking out more power. Instead, they seek more ways to help others.

2. They admit their mistakes. All leaders make mistakes. Humble leaders own up to them. They don’t play the blame game when things go wrong. Instead they hold themselves accountable. Vulnerability builds trust.

3. They share information and delegate. Humble leaders are aware of their strengths and weaknesses. They realize that they cannot do everything. They delegate because the work is more important than their ego.

4. They listen – They are approachable to employees and this allows them to create an environment of open communication and effective feedback.

5. They do not hesitate to give credit where credit is due. They appreciate the contributions of others. They are quick to recognize and reward the efforts of team members.

6. They are empathetic to those in their charge. They genuinely care about employees and employees can feel this sincerity. Empathy allows them to build healthy relationships and bond with team members.

7. They are authentic. They are the same person in every situation. This makes them trustworthy. Authenticity goes hand in hand with integrity. They are individuals of integrity.

” No matter how educated, talented, rich or cool you believe you are, how you treat people tells all. Integrity is everything.”

Humility doesn’t mean that leaders can’t make tough decisions. A humble leader should not be mistaken for a weak one. It takes strength, courage, and wisdom to practice humility.

Humble leaders get the best from people. They have more influence, they retain top talent, and they earn more respect and loyalty than those who rely upon ego and power. Want to be a good leader? Start by taking a slice of humble pie!